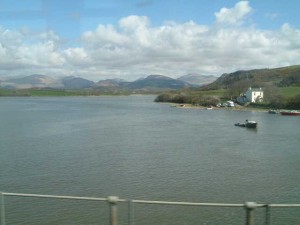 Ravenglass has wifi to access live train running information on smartphones. It has a pub – the Ratty Arms on the platform as well as other facilities in the village.  Fabulous views over the estuary next to the station. From here through Bootle to Silecroft is in the Lake District national park. There is a Roman bathhouse signposted ten minutes’ walk away. This is the southern end of the Hadrian’s Wall complex along the Solway coast. Ravenglass has the distinction of being in two Unesco world heritage sites as it is also in the Lake District. Muncaster castle is a mile up the road with excellent gardens – particularly the rhododendrons in May – and a quirky castle to visit. The main attraction for many is La’al Ratty, (la’al being Cumbrian for little as in the La’al Indian restaurant in Whitehaven) – otherwise the Ravenglass and Eskdale Railway 15 inch gauge line which runs from here through Eskdale to Dalegarth near Boot. Trains run for 45 weeks in the year with between two and 14 trains a day each way. Most trains are steam hauled. It has a museum at Ravenglass reopening in June 2017 and cafes and playgrounds at each end. You can book through tickets to Eskdale from anywhere on the Northern Rail network and save money especially if you use railcards and also saves time queueing. Allow at least 15 minutes to change back to the main line (you can call it that here!) as Ratty trains are often a little late, and it takes several minutes to get from one station to the other.